Theatres and shows: what challenges is the cultural industry called to? A dialogue with Giampiero Beltotto 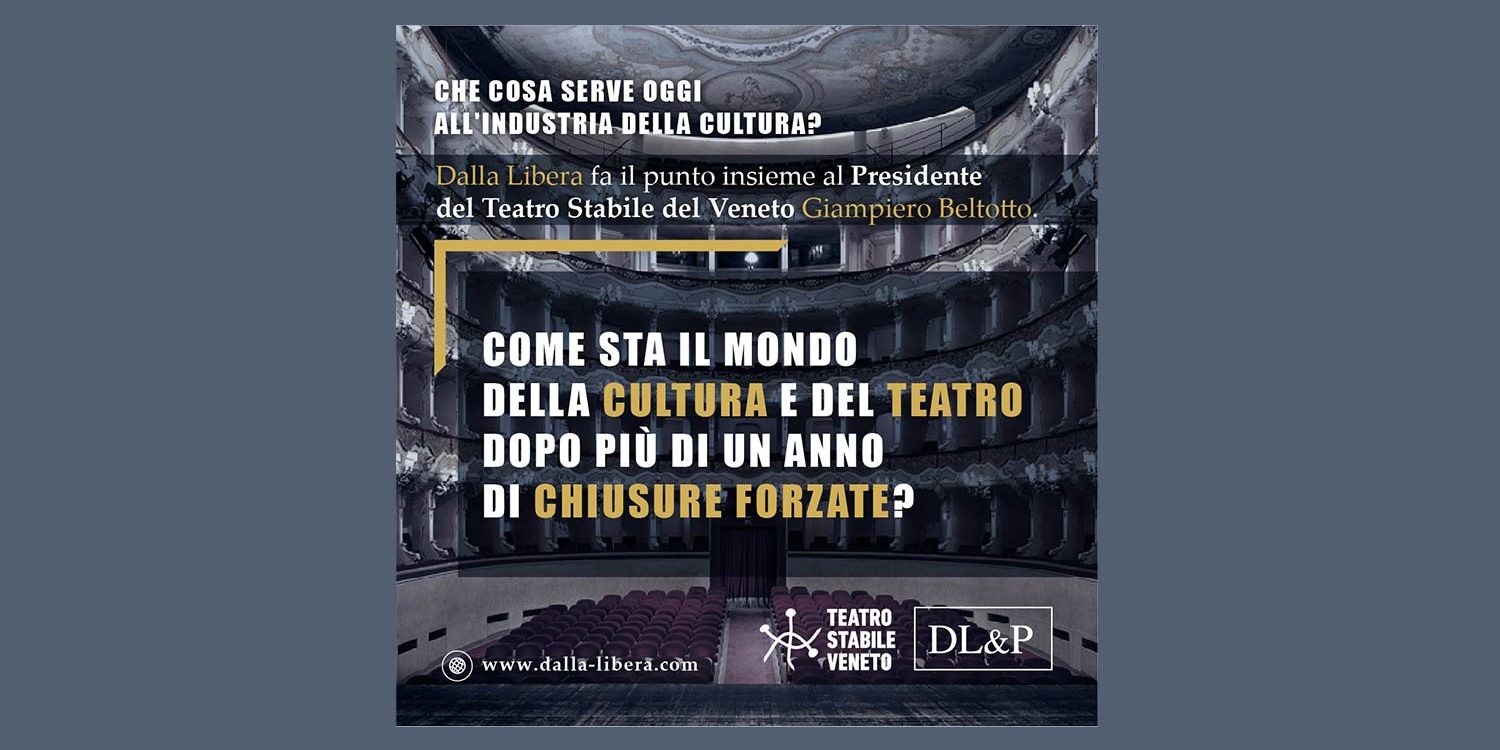 A new meeting of the Studio Dalla Libera & Partners in Padua, this time with Dr Giampiero Beltotto, President of the Teatro Stabile del Veneto, to discuss the world of theatre and entertainment, its characteristics, dynamics and future perspectives.

To mediate the meeting, aimed at investigating the world of culture and theater after an undoubtedly difficult year, Micaela Faggiani, journalist of La7 and director of Fuori La Voce.

Without being able to take anything for granted, this autumn in Veneto, is dedicated to recovering.
Beltotto specifies that the theatre is, in effect, a safe place. Mandatory mask, temperature control and Green Pass, strict rules for the presence on the stage: these are the current security measures aimed at protecting the public and workers.

“The Teatro La Fenice in Venice finds a good demand for tickets, the exhibitions resume, the concerts are beginning to go well. And the Teatro Stabile is starting again.” This is the scenario highlighted by our guest. In short, a horizon clear of the clouds that have accompanied us to date. Is it really so?

The theatre, workers and operators, have received various aids and resources to keep up an already fragile system. But beyond the public resources, scarce and conditioned by many factors, can private actors do something in terms of investment and support for the cultural industry?
For example, could the entrance of Assindustria and therefore of non-public partners bring some oxygen to the Venetian theatre?

“Yes, – explained Beltotto – and it should be remembered that the Teatro Stabile del Veneto has tried to be attractive by approaching institutional subjects including the chambers of commerce and industry of Padua and Treviso. That means the territory is willing to recognize us. And it is from this recognition that we can pursue a model of private involvement.”

What does culture represent today?

The president of the Teatro Stabile del Veneto is quite clear. Until today the world of culture has been discreetly assisted. However, it is necessary to find a way of not being unprepared for a change that seems inevitable. “The caterpillar must know how to become a butterfly”. An allegorical image that also pushes us to ask ourselves what theatre is today, and what “culture” means in our current social system.

“Before – Giampiero Beltotto reminds us – the places of culture were places where consciences were formed. Today this is no longer the case. People today no longer go to the theater to recognize themselves in an ideological world. Today people go to the theater to have fun. Fun, reflection, are our responsibility, our service.”

The debate then becomes as follows: how do we put those who provide this service in a position to do so with a certain dignity?

If the public partner accepts this definition must also provide the tools to propose the service or must necessarily take care of putting the actors involved in the conditions, including by tax measures, The European Parliament’s Committee on the Environment, Public Health and Consumer Protection has been working on this point.

“The Region must become the place within which the machine of entertainment services must develop.” Beltotto explained.

But what does it mean for an entrepreneur to invest in culture and theatre? What “goes in his pocket”?

First of all, it is necessary for us to shed light on the Art Bonus measure, a tax credit of 65%, dedicated to those who make payments aimed at supporting the Italian public cultural heritage.

But for Beltotto this is not the heart of the theme.
“Each determines its own “immaterial” advantage, but offering money to culture means building a lasting partnership over time.”

Culture, after all, according to Alberto Dalla Libera, protagonist along with Beltotto of this intense chat about the theater, may be the first approach to the world of entrepreneurs who are more willing to listen or invest in this sector if they are faced with a quality message.

After more than a year of on and off shows, the future of streaming is also at stake.
As we know, the lockdown has led the theater to be broadcast online. It somehow carried the stage on digital devices: computers, mobile phones, TV. It remains to be understood what the future of this different dimension will be.. .

The online world is a world that many realities have had to face during the pandemic that began in 2020.
But, anticipating that the difference between streaming and theatre in the presence is socialization and sharing, can streaming theater have a future once the pandemic is over?

And that is, if streaming has the gift of generating curiosity, will it ever replace theatre in presence?

Beltotto surprises with his answers abandoning the halo of rhetoric that often accompanies the discussions on culture.

“Yes, it can replace it, because for the generation of digital natives the fruition is indifferent. I myself during the lockdown I reviewed some of the RAI drama of the ’60s. They were not the theater but a production format suitable for television, a remake on a new platform of the time.
Streaming will work if we invest in productive structures that know how to decode an old pirandellian text adapting it to the new tools.
The theater, however, will never be completely replaced by streaming, you just have to know how to adapt and innovate, following the progress. The good side of progress? What gives us choice.”

After all, when asked what is missing at the theatre today, Beltotto was categorical.

Ideas and new ideas are missing.
If a project is really good, it will be funded.
The question may not be about how much, but to who.
Will there be too many subjects on the cultural scene?
And in that case, how do we determine who’s in and who’s out?

Selecting who is worthy today is up to the public hand, which for the moment manages most of the resources. This is the road to follow to Beltotto.

“In a changing world we must not be afraid of change. We need to imagine the world that we want in a way that is consistent with what we can produce: what do we like to stage and communicate?”

This question opens up surprising and complex scenarios. For which you will need another appointment.

In the meantime, you can watch the whole interview here.